The Vitak-Elsnic story is a classic American success story. It was built initially on the musical skills and business acumen of Louis Vitak, who was born November 27, 1862 in Janovice, Bohemia, now part of the Czech Republic. Vitak emigrated to the U.S. in 1881 and settled in Canton, Ohio. He derived his livelihood from providing instruction in wind and stringed instruments and also had a wholesale musical instruments business. Vitak was active in the local community, composing marches for Canton’s Grand Army of the Republic Band. He began to actively compose and arrange music including the Duke Albrecht March, self-published by Vitak in 1894. (MPA now publishes and sells a new arrangement of this for marching band.) Vitak was also a violin professor at Mt. Union College in Alliance, Ohio from 1896-1897.

In 1902, Vitak moved his music business to Chicago, which had a burgeoning Bohemian community. There, he formed a partnership with a local concertina virtuoso, Otto Georgi, forming the Georgi & Vitak Music Company. Georgi & Vitak published a variety of musical arrangements, in addition to selling music instruments. (Bowling Green State University’s Music Library and Sound Recording Archives displays a trumpet and a concertina sold under the Georgi & Vitak brand.) Georgi & Vitak incorporated in 1912. By 1920, the Georgi & Vitak firm had become a very successful publisher of Bohemian-style music, producing dozens of arrangements of polkas, waltzes, and marches for bands and individual accordionists and piano and concertina players.

The company changed its name in 1924 to the Vitak-Elsnic Company, a name that would become the gold standard of polka genre publishing. Over the next few years, Vitak transitioned leadership of the business to the next generation, led by his nephew Joseph P. Elsnic, a musical phenomenon. At an early age, young Joe had mastered the violin, accordion, piano and virtually all brass instruments, especially the newly-developed sousaphone. He was so proficient at the sousaphone that, upon enlistment in 1918, he was sent directly to the Great Lakes Naval Training Center outside of Chicago. There he became a member of the Navy Band under the direction of none other than John Philip Sousa.

Young Joe – still not yet 30 – had little time to learn the ropes from his uncle Louis, who retired in 1926. But he was more than up to it. Louis Vitak made a superb choice of his successor, a man who would not only continue what he had started but who would build upon it. After Vitak’s retirement, Joe Elsnic’s brothers also became involved in the family business. 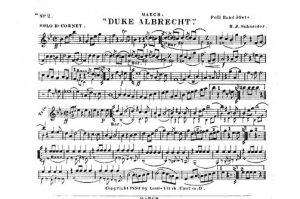 Joe Elsnic was not just a great musician, but importantly for this business, an especially prolific composer and arranger of some of the standards of the genre. He continued his uncle’s outreach and published music directed at other ethnic communities, especially the Polish community. He built relationships and collaborated with the best bandleaders of the day, as well as composers and arrangers, who provided fresh material for publication. Like his uncle Louis, he scrupulously copyrighted every original composition and most arrangements to protect their investment; over 600 of these copyrights are still valid. The Vitak-Elsnic Company was then, and is still today (as a Division of Music Publishers of America), the leading publisher of American polka music in the world.

We use cookies to ensure that we give you the best experience on our website. If you continue to use this site we will assume that you are happy with it.Ok