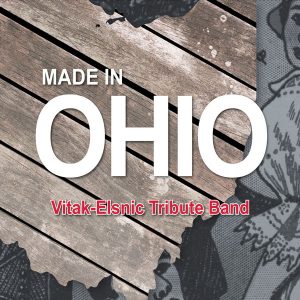 Music Publishers of America, LLC (“MPA”) is pleased to announce the upcoming release of its third album in a series of music from its Vitak-Elsnic Collection.  The album, entitled Made in Ohio, contains 16 all-instrumental selections of classic polkas and waltzes.   The music was recorded in Ohio by the Ohio-based Vitak-Elsnic Tribute Band.   Band members were all born and raised in Ohio.  The selection of the album name was obvious.

“When we began this project, we wanted a different sound,” said MPA President and band member Steve Harris.  “Two of the features that makes our renditions interesting are the instrumentation and our interpretation of the music.”   The Vitak-Elsnic Tribute Band is all-brass – trumpets, middle brass, and tuba – complemented by piano, accordion, and drums.  “The sound is definitely unique,” Harris said.  “It’s very mellow, but at the same time quite lively.”  Band members include brothers Kent, Todd and Steve Harris, Dennis Schwiebert, Ron Ehrman and Squeezebox Band leader Ted Lange, who also recorded and engineered the album at his Powerbox Studio in Ridgeville Corners, Ohio.

While the lineup of instruments is unique, the songs are performed in a traditional Vitak-Elsnic style.  Most of the songs on this album are standards from original Vitak-Elsnic arrangements, including the well-known Schneider Polka, Blue Skirt Waltz, and Springtime Polka.  Two traditional tunes  – Forever and Ever Waltz and Praha Polka were not originally published by Vitak-Elsnic, but were especially arranged for this album to achieve a consistent sound and feel.

Pre-release copies of the album can be purchased through the MPA-Vitak-Elsnic Store (https://vitak-elsnic.com/) and will be available for download from iTunes and other digital platforms.

For more information, contact Harris at steve@musicpublishersofamerica.com or call 855- NUMUSIC (toll-free in the U.S.).