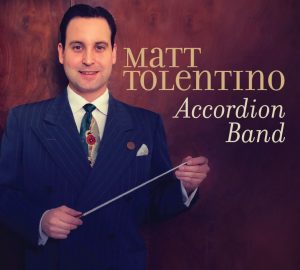 For the creation of his album, Accordion Band, Matt Tolentino drew his inspiration from accordion band charts published between 1935-1960 by Vitak-Elsnic Company. Bringing this decades-old music back to life seemed tailor-made for this multi-instrumentalist and accordionist extraordinaire. The 17 songs on the release range from classical to traditional folk tunes, which are performed by Tolentino playing all 5 accordion parts using a selection of instruments from his personal collection.

Tolentino has that rare skill of being able to be true to the original arrangement, while adding color to the musical image through his own interpretation and use of trills and flourishes. The result is a unique sound that demonstrates the beauty of these arrangements, the versatility of the vintage accordions and Tolentino’s musical artistry. Accordion Band will be available starting on June 18, 2021 on CD via Tolentino’s and Vitak-Elsnic’s websites along with digital platforms such as Spotify, Apple Music, and iTunes.

Matt Tolentino is a musician and bandleader specializing in the live performance and preservation of “old-time” music. You can catch his live weekly shows on Facebook and Youtube along with in-person performances of his groups The Singapore Slingers, The Royal Klobasneks, and The Matt Tolentino Band.

Vitak-Elsnic Company (V-E) is America’s oldest and continuously-operating publisher of original compositions and arrangements of traditional central European music. From its origins in 1912, V-E has published over 2,000 different original compositions and arrangements, including hundreds and hundreds for accordion. Buried deep in the accordion arrangements are a small handful for accordion band. V-E is an operating division of Music Publishers of America, LLC.