MPA TO RELEASE NEW VITAK-ELSNIC CD, MUSIC FROM THE HEARTLAND 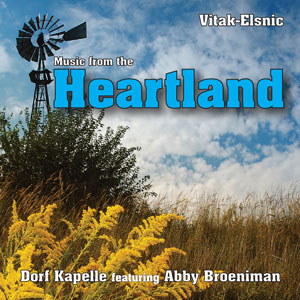 A new album of songs from Music Publishers of America’s (“MPA”) Vitak-Elsnic collection entitled Music from the Heartland is scheduled for release on January 19, 2016 according to MPA President Steve Harris. The CD and download contains 18 selections of new arrangements for concert and community bands by Ernie Broeniman (“Broeniman”), and was performed by Broeniman’s Dorf Kapelle band. Seven of the selections contain vocals by Abby Broeniman, the lead vocalist on MPA’s acclaimed 2015 release, Then and Now. All lyrics on the album are new, English-language renditions.

As with Then and Now, the selections on Heartland include some well-recognized standards, but also some brand new selections for polka enthusiasts. Two of the songs on the album feature new Broeniman arrangements of tunes from old, unpublished manuscripts from the 1940s. The manuscripts were found by Harris in 2015 buried among some old Vitak-Elsnic business records. One of them, “Wedding Bells Polka”, was composed by famed accordionist and arranger Arthur Metzler. Broeniman worked with the rough manuscript to develop a complete arrangement, and MPA President and lyricist Steve Harris added lyrics. “Charlotte Polka” was arranged by Broeniman from a partial manuscript by Vaclav Fisher, another well-known composer and arranger of music from the polka genre. “The manuscript carried a Czech title, but we decided to change the name in honor of my mother and a granddaughter, both named Charlotte,” Harris said.

Dorf Kapelle was founded in 1988 by Broeniman, a highly-regarded Wisconsin high school band director and performer. The band performs at engagements across the upper Midwest. Since 2012, he has actively arranged music for concert band that had previously been published years earlier by the Vitak-Elsnic Company.

Abby Broeniman was the principal vocalist on MPA’s Then and Now album, where she performed with Alex Meixner and the Vitak-Elsnic All-Star Band. Abby has appeared on RFD-TV’s Mollie B Polka Party and also performed in Branson on the 2013 Mollie B Christmas Special. In 2015, Abby received the Youth Achievement Award from the Wisconsin Polka Hall of Fame.

The album will be able to be purchased through the MPA website (www.musicpublishersofamerica.com) and available for download from iTunes and other digital platforms.

For more information, contact Harris at: steve@musicpublishersofamerica.com or call 855 NUMUSIC (toll-free in the U.S.).